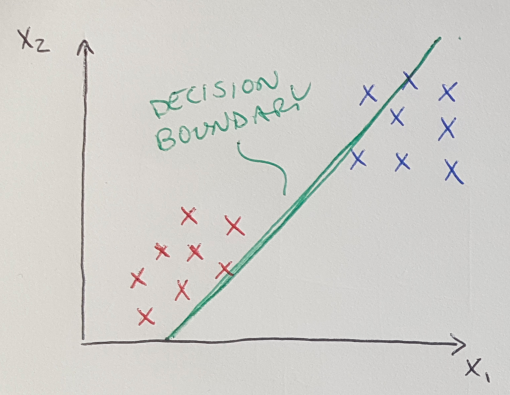 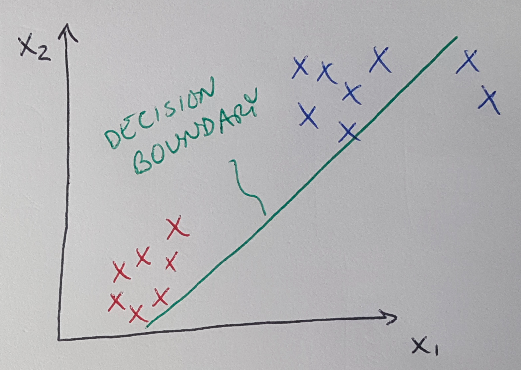 The logistic function, as defined by Verhulst* in the 1800s [3], is also described as the sigmoid function [2] and can be defined by the following equation [2]: 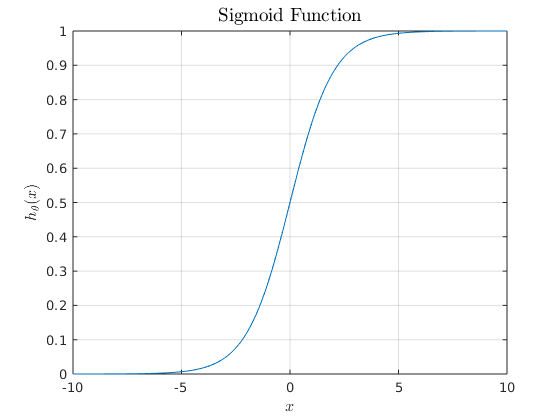 The argument to the hypothesis is also called the decision boundary [1]. It is written as [1]:

Notice that this is only an example inequality that could represent the decision boundary. We could choose any polynomial, with higher order terms, if we thought it would better separate the two classes [1]. We will use gradient descent to choose the parameters, theta, to fit the decision boundary to the dataset so that the hypothesis accurately models the training data [1]. 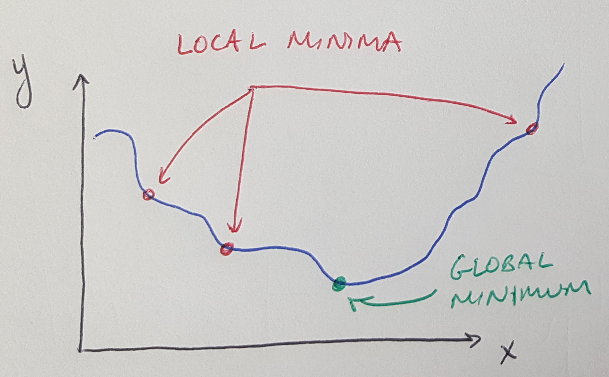 If we were to use the same cost function for logistic regression as we used for linear regression, we would find that, because of the nonlinear nature of the sigmoid function, the cost function would become non-convex [1]. Non-convex functions have multiple local minima, and therefore it can be difficult to find the global minimum because our gradient descent algorithm may get stuck in a local minimum instead (see Figure 4) [1]. So to avoid this problem, logistic regression uses a logarithmic cost function which, when used with the sigmoid function as the hypothesis, will return a convex cost function [1]. This ensures that we will find the global minimum using gradient descent [1]. The logarithmic cost function is [1]:

We can actually simplify this function to one equation as follows [1]:

And when we take the derivative of the cost function, we will find that we actually get exactly the same expression as we found when we performed linear regression [1]. The important distinction, of course, is that the hypothesis has changed from a linear function to the sigmoid function [1]. We can write the equation for gradient descent as [1]:

Where the hypothesis, h, is the sigmoid function in this case. Notice that there are more advanced optimization algorithms than the standard gradient descent approach we have seen thus far [1]. A lot of these methods use a line search algorithm, which means that they search for the best value of alpha (the learning rate) to use on each iteration, which can make them more efficient than standard gradient descent, which uses a fixed learning rate [1].

This approach can also be used for categorizing data into multiple classes (i.e. “multiclass classification”) [1]. To use logistic regression to sort data into multiple groups, we learn decision boundaries that separate each group from all of the rest of the data (this is called the “one vs. all” approach) [1]. We then place new data in the group that returns the highest value from its hypothesis function [1].

*According to [3], Verhulst never explained why he chose the term “logistic” for this function. There is some speculation that it might have been chosen in contrast to a logarithmic curve [3].