Recently I wrote a post on stability of linear systems where I introduced the Nyquist plot. Now I want to go into the details of how to draw one without using a Bode plot. If I have time in the future I will also explain how to draw a Nyquist plot using the Bode plot - it is an easier method, in my opinion, but it assumes that you have a reliable Bode plot to start with.

I first want to clarify something from last post: The Caucy Argument Principle states that [3]:

I learned to draw Nyquist plots this way from Brian Douglas [1], but he references a lecture by Prof. Gopal [2], so I will cite both here for completeness. We will use an example transfer function given below, but first I want to go over two concepts that will be useful in this example. The first concept is the idea that Nyquist plots are symmetric about the real axis (in both the s- and w-planes) [1]. We will use this to reduce the amount of work we have to do to obtain the plot.

The second concept is the idea that the part of the Nyquist contour in the s-plane that is at infinity (i.e. the curved part that encircles the entire RHP) maps to a single point in the w-plane if the transfer function is proper or strictly proper [1]. This is because, if we imagine ourselves sitting on this part of the contour, the poles and zeros of the transfer function would appear grouped at a point near the origin [1]. That is, no matter where we are at infinity, we would be so far away that we could not see the contributions of the poles and zeros to the phase. So we only need one point to represent the phase anywhere at infinity on the RHP. If the system is strictly proper, this point is the origin; if the system is proper, this point is somewhere on the real axis [1]. This also means that I really only care about what is happening along the imaginary axis in the s-plane [1]. 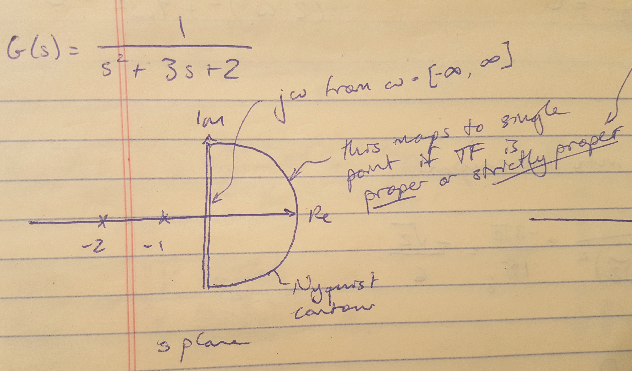 Prof. Gopal’s method states that you only need 4 points to be able to sketch the Nyquist plot, and these points are [1],[2]:

Instead, let’s substitute j*w into my transfer function as shown below. 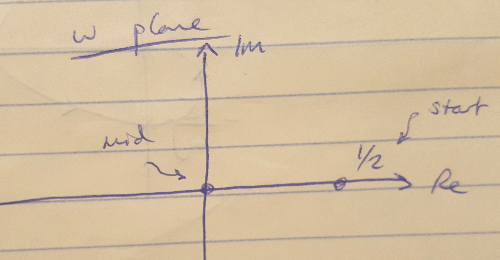 Next we need to find the imaginary and real axis intercepts of the Nyquist plot. To do this, I am going to rationalize the denominator of my transfer function and then separate the real and imaginary components as shown below. 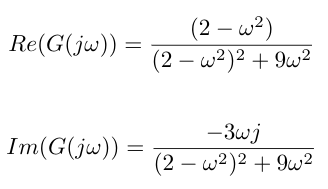 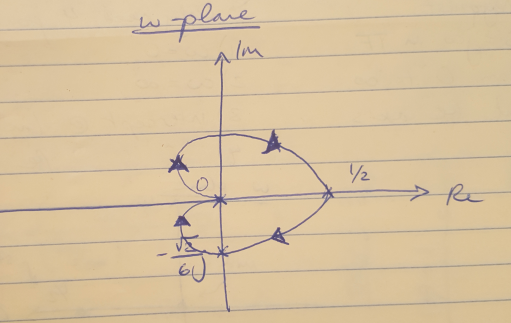 This plot shows that my system is stable because I have no encirclements of -1 and N = Z - P = 0 as we expected.