We first encountered the reparameterization trick when learning about variational autoencoders and how they approximate posterior distributions using KL divergence and the Evidence Lower Bound (ELBO). We saw that, if we were training a neural network to act as a VAE, then eventually we would need to perform backpropagation across a node in the network that was stochastic, because the ELBO has a stochastic term. But we cannot perform backpropagation across a stochastic node, because we cannot take the derivative of a random variable. So instead, we used something called the reparameterization trick, to restructure the problem. In this post, I am going to go into this solution in more detail. First I will outline why we need the trick in the first place, and then I will try to provide more insight into the mathematics behind the reparameterization trick.

Why Do We Need the Reparameterization Trick?

In a variational autoencoder, we are trying to learn an approximation of a posterior distribution, p(z given x), which converts the input data, x, to a latent space representation, z. We are doing this by learning an optimal approximation of p(z given x), which we call q*. I can optimize q* by minimizing a loss function using gradient descent - in other words, by using backpropagation to teach a neural network to represent q*. But the problem we run into when we do this is that we cannot take the derivative of one particular term in our loss function. The loss function can be written as follows [2]:

The first term in the loss function is stochastic with respect to z, because z is a random variable [3]. I cannot take the derivative of a random variable, so the backpropagation algorithm will get stuck at this node in the neural network [3]. Consider the left-hand side diagram in Figure 1, where the stochastic node (in orange) is acting as a bottleneck, preventing us from backpropagating the derivatives from f to phi and x [3]. I can use the reparameterization trick to restructure this part of the neural network so that I have a deterministic node representing z, which provides a clear path for the backpropagation algorithm to convey information from f to phi and x, as shown in the right-hand side of Figure 1 [3]. 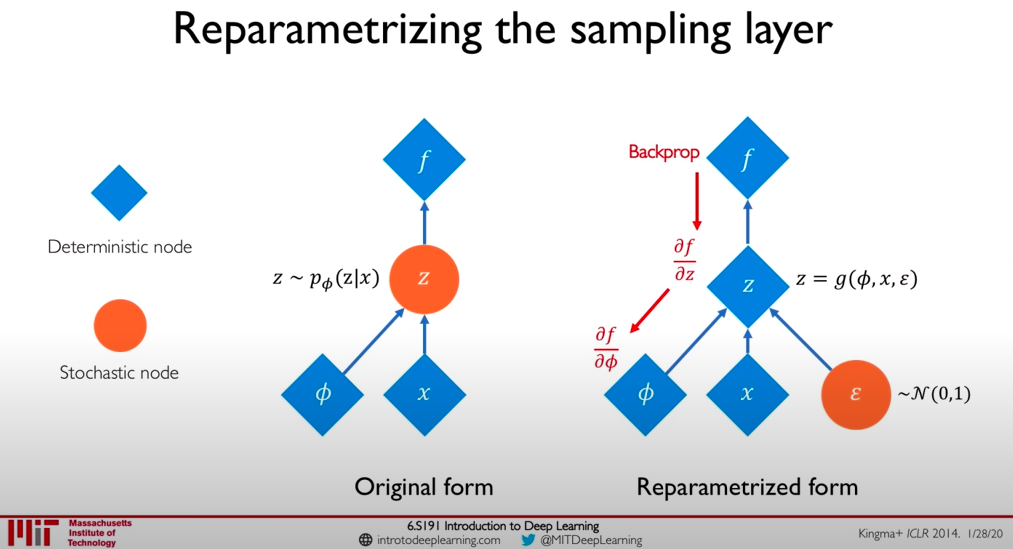 The Math Behind the Curtain

The first term in the reparameterized version of z - specifically, mu - is deterministic and so we can take the derivative of z. The standard deviation is still stochastic, but that’s okay, because it is no longer along the critical path in our backpropagation chain [3]. But why can we do this?

(2) Polar Coordinate Transformation. This method can be used to represent a pair of values pulled from a random variable (we can also call these random variates) in polar coordinates [1]. For example, if we had pulled (x, y) from p(z; theta), we could rewrite them as (r cos(theta), r sin(theta)) [1]. The reason we would want to do this is that it enables us to use other sampling tools to work with these random variates that we could not use otherwise [1]. 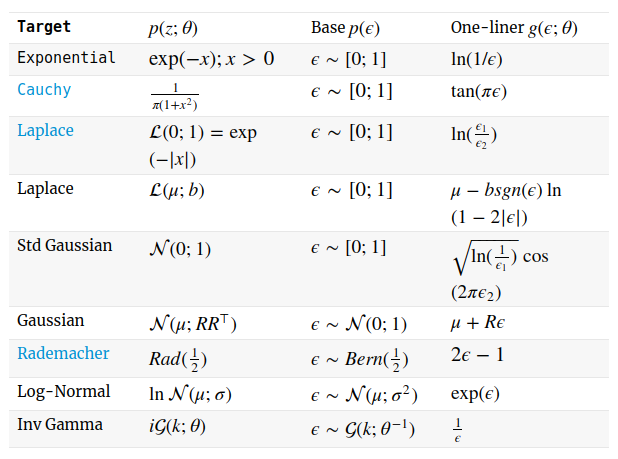 Hopefully this explanation provides a little more context for where the reparameterization trick comes from, and that you can understand why we might want to use it. I want to leave you with one final comment: the reparameterization trick works very well as long as you are using continuous distributions. However, it will not work for discrete collections of points; I will be writing soon about the Gumbel-softmax distribution, which was developed to deal with this problem, so stay tuned.

*The term “one-liner” comes from a 1996 paper that developed these reparameterizations for many different distributions [1]. The paper was written by Luc Devroye and can be found here [1].

[2] Altosaar, J. “Tutorial - What is a variational autoencoder?” https://jaan.io/what-is-variational-autoencoder-vae-tutorial/ Visited 06 May 2020.