Recently I wanted to learn more about how filtering works, and so I am going to spend a little time explaining the theory behind filtering, with a particular focus on Kalman filters and particle filters. I actually would argue that “filtering” is a confusing term to use to describe these tools, because even though we typically use them to track objects in space and time, I usually think of a filter as the thing I put my coffee grounds in every morning. But that’s just me.

Let’s introduce filtering as the solution to a particular problem that appears in robotics, computer vision and classical control. In these domains, we often want to track the motion of an object over time. We don’t know the object’s exact state (in this context, that means we do not know the object’s exact position, velocity, acceleration, orientation, etc.) but we do have a dynamics model for how the object moves, and we have measurement data [1]. I am going to use my dynamics model and my measurement data to guess what the object’s true state at every time step, and this process is performed by a filter [1].

Filters are solving a problem that we have seen before on this blog. In this problem, we are assuming that we cannot measure the state directly - in other words, we are assuming that it is hidden [2]. We are also going to assume that the process that we are studying is Markovian - that is, we think that the state at the next time step is only going to depend on the state at the current time step and the actions that we take at this time step [2]. Does this sound familiar? We are basically using a filter to track an object inside of a Hidden Markov Model (HMM), which we discussed when we were learning about graph networks [2]. We are also going to assume that the measurements only depend on the current state* and that the model, as well as the object that we are tracking, are going to change continuously and smoothly [2]. Given all of these assumptions, we now have a problem definition that we can begin to solve using probability.

A lot of the theory behind filtering depends on probability - we won’t really talk about the filtering algorithm until we get to particle filters, and even then the algorithm description we will look at will rely largely on probability. We can think of a filter as working to make an inference about the hidden state, x, given a set of measurements, z [2]. (We defined “inference” when we were discussing variational autoencoders, see the footnotes). In other words, we are going to use what we know about the system, namely the dynamics model and our measurements, to try to describe the probability density (or the distribution) of state x [2]. Note that I can also call my dynamics model my prediction of the state at the next time step [2]. 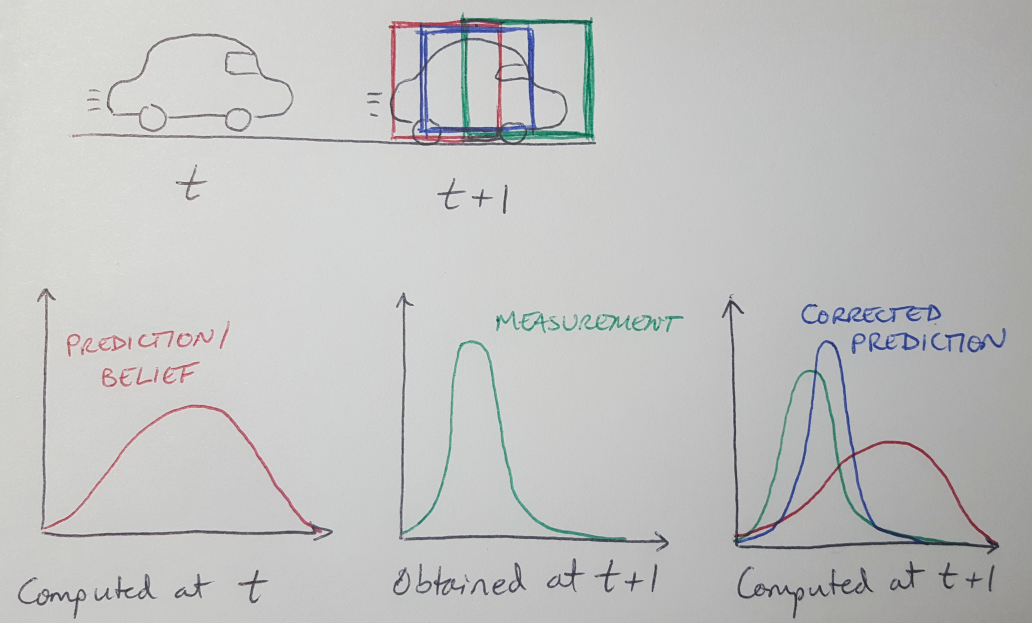 Prediction and Correction with Probability

As we discussed above, the tracking (or filtering) process is a two-step process of making predictions and then correcting those predictions about the current state of the object we are following. When we make a prediction, we are making a guess about the value of the state, x, at time t+1, given all of our past measurements up to time t [2]:

And so now I can use this concept to rewrite my integral in Equation 3 again as follows [2]:

Okay, so now we have an expression for the prediction step. Let’s look at the correction step, which will incorporate our knowledge of the current measurement into this probability distribution [2].

In the correction step, I have a predicted value of x at time t+1, and I want to incorporate my latest measurement, z, taken at time t+1 [2]. Mathematically I can write this below [2]:

Now I’m going to manipulate these equations, first by observing that I can rewrite Equation 8 by applying Bayes’ Rule** [2]:

Then we can apply the same independence assumption we described above to simplify the conditional probability of getting measurement z at time t+1 given the state x at time t+1 [2]:

Notice that we will never actually need to calculate this integral explicitly - this will become more clear as we describe specific approaches to filtering [2]. In fact, I will end this post here and next time, we will talk about the Kalman filter and the particle filter.

*Making the assumption that the measurement only depends on the current state may not always be a good choice [2]. For example, sensors can sometimes have hysteresis or a delay, which means that the reading you get at a current time, t, represents what the system looked like a couple time steps ago [2]. (Think of how the bathroom scale has to settle down when you step on it before you can get a good reading on your weight.)

**Prof. Bobick jokes that you should get Bayes’ rule tattooed on your foot, and I’m starting to agree with him…anyway, here’s the formula again in case you need it [2]: