Today we are going to continue building on ideas from spectral graph theory to define an expression for convolution over a graph. This theory is based on several papers by Prof. Max Welling’s team of researchers at the University of Amsterdam into generating novel graphs using relational graph convolutional networks (R-GCNs) [1, 2] and generative adversarial models (GANs) [3].

In this post, we will begin by understanding how we can use spectral graph theory to convert the representation of a graph from the “node domain” to the Fourier domain [4]. Then we will apply this idea to writing the expression for graph convolution, going into detail to explain how this expression was obtained.

Kipf and Welling tell us that a spectral convolution of a graph is done by multiplying some signal, x, with a filter, g, expressed in the Fourier domain [2]. Huh?

What does the graph Fourier transform look like? Let’s say we have a graph, G = (V, E). We can have a graph signal, f, that maps the nodes of the graph to some real scalar value, like so [4]:

Similarly, the inverse function exists since the eigenvectors of the Laplacian are orthogonal [4]:

That was a lot of detail, but hopefully you can see now that the graph Fourier transform is very similar to the classic Fourier transform, and it allows us to move between the node domain of the graph, f(i), and the graph spectral domain, f(lambda) [4]. In the next section, we will see how we use this transform to write an expression for graph convolution.

Let’s return to see how convolution can be written in the Fourier domain according to Kipf and Welling [2]:

We can define U as the matrix of eigenvectors of the normalized graph Laplacian, in other words [2]:

Okay, so Equation 4 convolves a graph via its Laplacian. We’ve done it! We can do graph convolution! However, Kipf and Welling point out that it is computationally expensive to compute Equation 4 directly [2] and so they suggest that we can approximate the filter, g, with a short expansion in Chebyshev polynomials** [2]:

Now that I have this approximation, I will go through the manipulations that I think Kipf and Welling used to arrive at their final expression for a K-th order approximation of graph convolution (they only gave the final equation in their paper) [2]: 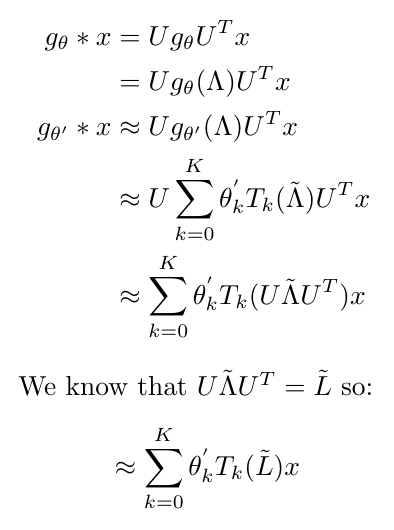 This ultimately results in [2]:

From Graph Convolution Back to the Graph Propagation Function

We are going to look specifically at the first order form of the approximation shown in Equation 8. You might be wondering why we want to use the simple first order form when we could choose a more complex approximation. Great question! Kipf and Welling explain that they chose to use the first-order form because it is a linear function that is easily calculated [2]. More importantly, as you will see in a minute, the first order expression does not actually have any of the Chebyshev polynomial structure, even though we used Chebyshev polynomials to derive it [2]. This is valuable because we want our model to be as general as possible, and if we had an explicit Chebyshev polynomial structure in our function, we might be more likely to overfit our model to the graph in a certain way [2]. If you think back to our discussion of relational inductive biases, including the Chebyshev polynomial structure would be like adding additional inductive bias. It might help, but it is more likely to force our neural networks to think in a way that is too specific and not general enough for all the different kinds of graphs that we are likely to see.

So we have now explained why we will choose to use K = 1 in our approximation of graph convolution. We should also note that we choose the maximum eigenvalue to be 2 in this approach [2]. Kipf and Welling explain that they predicted that the value of the maximum eigenvalue would not really matter, because the neural network weights would adapt to whatever value they chose [2]. Now that we have defined these two parameters, we can write out our first order approximation. I will show you my working out that led me to obtain the equation that Kipf and Welling obtained in their paper [2]: 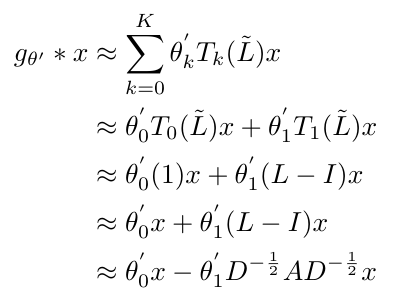 We say that the theta-prime values are free parameters, and all the parameters describing the filter, g, can be shared over the entire graph [2]. Notice that in its final form, this expression does not show any of the Chebyshev structure that we saw in Equation 6.

Even though this approximation is first order, Kipf and Welling will stack multiple layers of convolution to convolve increasingly larger neighborhoods of the graph [2]. Since they do stack layers, they decided to simplify the convolution function to have only one parameter, theta, to avoid overfitting and reduce computational time, leaving us with the following expression [2]:

Kipf and Welling point out that this function can lead to numerical instabilities and either vanishing or exploding gradients when multiple layers of convolution are stacked on top of each other [2]. They addressed this problem by applying what they call a “renormalization trick” which just re-writes the expression inside parentheses in Equation 10 as follows [2]:

I’m not completely sure why this expression is more numerically stable; it might be because on every layer of convolution, we renormalize the adjacency and degree matrices so that they do not shrink or explode over time.

We are almost there. Now that we have a “renormalized”, first order approximation for graph convolution, we can write an expression for the convolved signal, Z, in terms of the adjacency and degree matrices of the graph, the input signal, X, and the matrix of filter parameters, theta [2]:

Here, Z is a N x F matrix where N is the number of nodes and F is the number of filters [2]. Theta is a matrix of size C x F where C is the number of input channels (i.e. each node will have C features) [2]. This operation now has computational complexity that is linearly proportional to the number of edges x F x C [2]. The AX operation is efficient because we are multiplying a sparse matrix (A) with a dense matrix (X) [2].

Recall that we said that the output of the graph propagation function for the l-th layer is Z, and the value of H at the 0-th layer is X. We also can replace the matrix of filter parameters, Theta, with the matrix W in Equation 13. Kipf and Welling decided to experiment with their novel GCN using a two-layer implementation, which means that the entire graph propagation function can be written as a single equation as follows [2]:

Note that A-hat is a “pre-processing step” that performs the “renormalization” of the adjacency matrix prior to performing the graph convolution operation [2]. In this implementation, W-0 is a C x H size matrix, and W-1 has dimensions H x F. The softmax activation function on the output layer is applied row-wise.

Before we end, I want to just give the expression for the cross-entropy error that the authors used to train this neural network so that it could perform multiclass classification [2]:

The weights, W-0 and W-1, are trained using gradient descent [2]. The matrix Y is the set of indices for labeled nodes [2].

Okay, so in this post we have learned how graph convolution works and how Kipf and Welling applied it using a neural network approach. This is a key insight that we will carry into our next post where we will discuss how this graph convolution function is used to build R-GCNs. In future posts we will then return to the MolGAN paper and understand the role that R-GCNs play inside the MolGAN architecture.

*I am not sure this interpretation is correct. Let me know if you have a better one.